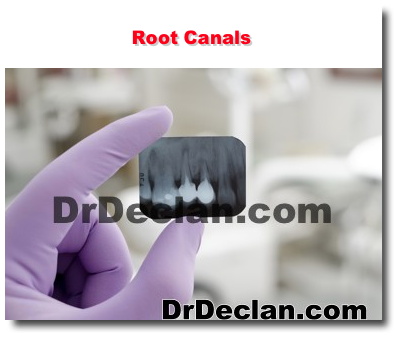 Most people outside of the dental field don't know exactly what a root canal is, except that when their uncle Mike had a terrible tooth ache and went to the dentist he was told he needed a root canal. This is how the root canal has reached its almost legendary urban myth status. People associate the weeks of pain they've been enduring with the recommended treatment of a root canal. However it is most often the root canal that frees the patient from the pain or gets them on the path to recovery. It is most often the months or years of decay and bacterial infection in the tooth that has inflamed the nerve to levels of such pain rather than the root canal procedure itself.

So what exactly is the root canal procedure? Simply put a root canal is the cleaning of the canals inside the tooth and sealing it to prevent the possibility of future bacterial contamination. The most common condition that necessitates a root canal is bacterial contamination of the canal from decay. This eventually leads to infections in the jaw bone and abscesses in the gum tissue or surrounding cheek or neck. If the condition is neglected long enough a patient can actually find themselves in the hospital with a life threatening infection. Other conditions that may require a root canal vary but may include necrosis of the nerve or the need to establish a foundation for a restoration on a badly broken down tooth.

Our office takes pride in our root canals and we have the advantage of having the best technology to allow your tooth to heal after the infection has been treated. Laser disinfection in the root canal has been shown to be greatly effective in reducing the bacterial contamination in the canal and therefore give the body the best chance of healing after an infection.
ref no:5226

Questions? Ready for an appointment?

Questions? Ready for an appointment?